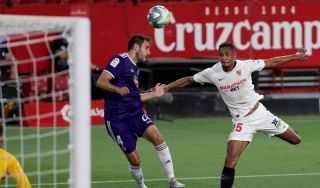 Sevilla were held to a fourth consecutive draw in La Liga by a stubborn Real Valladolid in the Friday night encounter.

Kiko Olivas opened the scoring in the 25th minute for the visitors with a looping header over the reach of Tomas Vaclik, whose positioning may have been called into question.

Valladolid lead Sevilla 1-0 at the break 💜⚪

Kiko Olivas’ looping header separates the teams as the visitors are looking to take a big step towards safety 👏 pic.twitter.com/ucFd8kPuhu

The second half saw a constant stream of Sevilla pressure and they thought it had paid off ten minutes after the break when Munir El-Haddadi converted a cross from Jesus Navas, but it was subsequently overruled by VAR in a marginal offside decision.

Julen Lopetegui’s side grew increasingly frustrated as they were camped in the visitors half for the majority of the second half and their pressure paid off with seven minutes remaining as they were awarded a penalty, subsequently converted by Lucas Ocampos – his 12th league goal of the campaign.

However, it was the visitors who nearly snatched victory at the end – Ruben Alcaraz’s fine solo run and effort was stopped by Vaclik, redeeming himself for his earlier earlier, while the Czech also stopped Enes Unal’s effort in the final minute of extra time.

Sevilla stay fourth – but the result gives Getafe, Real Sociedad, Villarreal and Valencia hope that they may yet catch them, while Valladolid move up one place to 14th.