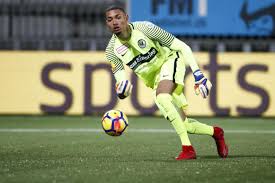 Alaves, Levante, Real Betis and Granada are all monitoring the Swiss international, according to reports from Mundo Deportivo, with a view to an offer ahead of the 2020-21 season.

The 24-year old joined Lugano from fellow Swiss side FC Wil 1900 in July 2019, and he has established himself as first choice in the last two seasons.

Despite being under contract until 2022, his performances have attracted interest from across Europe, and he could spark a La Liga bidding war in the coming months.

A move to Alaves or Levante would see him serve as a back up option to Fernando Pacheco or Aitor Fernandez respectively.

However, Real Betis or Granada could offer a better chance of a regular first team role.

Former Everton keeper Joel Robles has failed to convince with Real Betis this season, and the club will be on the lookout for a new keeper, and Granada are braced for offers for Rui Silva.