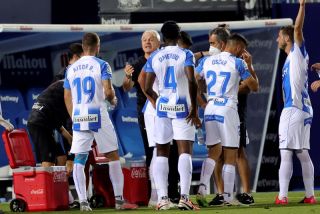 Leganes moved one point clear of Espanyol at the foot of La Liga but were made to regret missed opportunities in their scoreless draw with Granada.

The home side enjoyed the better of the opportunities and almost 60 percent possession but missed a host of goalscoring chances including Miguel Angel Guerrero’s second half penalty.

In a surprising tactical choice, Lega boss Javier Aguirre left the team’s star player Oscar Rodriguez – on loan from Real Madrid – on the bench as he started both Guerrero and Guido Carrillo in attack.

However, Carrillo’s early injury brought Oscar into the game but the hosts were frustrated by poor finishing and an exemplary performance from Granada goalkeeper Rui Silva.

The result leaves Leganes four points from safety, one point above Espanyol and one behind Real Mallorca with Eibar (29 points), Celta Vigo (30) and Real Valladolid (33) also looking over their shoulders.

Granada moved up one place to ninth, but all other sides around them have yet to play this matchday.