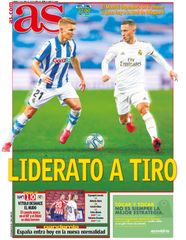 Real Sociedad Martin Odegaard will face his parent club Real Madrid tonight, in a potential audition for a summer return.

The Norwegian international has impressed with the Basque side in 2019-20, after joining on a two-year loan at the start of the current campaign.

However, with Los Blancos retaining a clause to end his loan early and bring him back to the Spanish capital next month, rumours have increased over his immediate future.

According to the front page of Sunday’s edition of Diario AS, Zinedine Zidane will use tonight’s crunch clash at the Anoeta Stadium to assess the midfielder’s progress in 2020.

Despite the speculation, La Real boss Imanol Alguacil has insisted he remains confident Real Madrid will honour the original deal, with Odegaard preferring to stay at the club for another year.

A win for Zidane’s side will edge them ahead of Barcelona in the La Liga title race, following their draw at Sevilla on Friday.