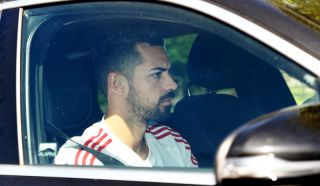 Arsenal defender Pablo Mari out for season with ankle injury

Spanish defender Pablo Mari will miss the rest of the season for Arsenal after sustaining an ankle injury against Manchester City.

The news was reported by The Athletic’s David Ornstein, with the central defender possibly requiring surgery on ligament damage.

The defender joined the Gunners on a six-month loan deal from Brazilian club Flamengo in January and started the game against City – his second league start after playing against West Ham in March.

Pablo Mari began his career at Real Mallorca before moving on to Gimnastic Tarragona but in 2016 he joined Manchester City, before he was loaned out multiple times until joining Flamengo in a permanent deal last summer.

The 26-year-old spent last season on loan at Deportivo La Coruna, where he made 38 appearances and was part of the side who missed out on promotion in the playoff final against Real Mallorca.

He made two La Liga substitute appearances for Mallorca in the 2011/12 campaign and has also spent time at both Girona and NAC Breda.