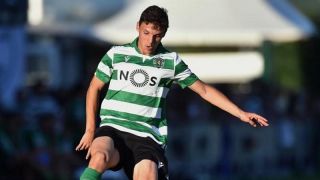 Highly-rated Sporting CP defender Eduardo Quaresma has renewed his contract at the club amid interest from Atletico Madrid and Manchester United.

The 18-year-old has penned a new deal at the Lisbon giants through to the summer of 2025, with a new and improved €45m release clause – which could still be viewed as attainable for elite European clubs.

The Portuguese teen has made 25 appearances for Sporting this season with Juventus, Milan, Inter and RB Leipzig among the other clubs linked with a move, as cited by La Razon.

“This contract extension proves that this club believes in me and I believe in this club,” Quaresma told his club’s website. “We will remain together for many more years to come.”

Atleti are said to be keen to add another central defender to their ranks this summer and have been linked to Real Valladolid defender Mohammed Salisu, who has a €12m release clause.

However, Quaresma now appears unlikely to be on the move for this summer at least as he continues to grow into an increasingly important player at Sporting.

Image via A Bola