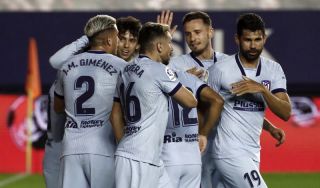 Diego Simeone’s side leapfrogged Getafe and Real Sociedad, the latter of whom are yet to play, as they won their first domestic away match of 2020.

Club record signing Felix netted twice at El Sadar – drilling home the opener midway through the first half and poking home a second just after the break from Diego Costa’s through ball.

Substitute Marcos Llorente added a third and then turned provider for Alvaro Morata and Yannick Carrasco to add gloss to the scoreline late on.

“We have changed many players but they have responded in the same way,” Simeone told Movistar after the game, as cited by Cadena Cope.

“Joao Felix is a very decisive player but I am happy with the whole team, this gives us momentum for the games that are to come.”

Elsewhere on Wednesday, Celta Vigo missed a huge chance to put space between themselves and the bottom three but Iago Aspas spurned his spot-kick in the 71st minute of a scoreless draw at Real Valladolid.

Eibar and Athletic Club Bilbao played out a pulsating 2-2 draw at Ipurua – Raul Garcia opened the scoring from the spot for Athletic but a goal from Kike and Fabian Orellana penalty put Eibar ahead before Asier Villalibre’s 81st minute equaliser.