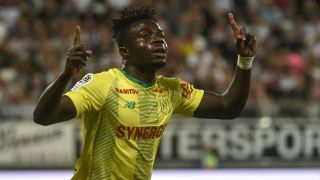 Nantes have completed the signing of Levante winger Moses Simon on a permanent deal worth €5m following a successful loan spell.

The Ligue 1 club confirmed the news that they had completed the signing of the Nigerian international on a permanent deal, with the player signing a contract until the summer of 2024.

The 24-year-old has starred for the French club this campaign, netting nine goals and also providing eight assists before football was suspended in early March, with Ligue 1 later ending their season.

Levante initially signed the Nigerian from Belgian club Gent in a €5m deal two summers ago but he scored just one goal in 23 appearances for the club and was loaned out last summer.

His strongest position is on the left-side of attack but he has also been used in the role of a striker for Nantes this campaign.

He won the fans’ award for best player at the Stade de la Beaujoire with an impressive 40% of the votes – preceding the club making the move permanent.

Nantes hope to snap up Nigerian international Moses Simon from Levante
29 May 2020, 9:38