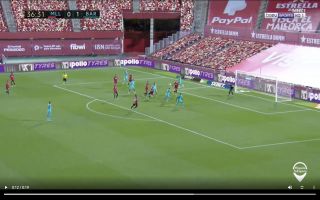 Barcelona striker forward Martin Braithwaite has his first ever La Blaugrana goal, as Quique Setien’s side stretch their lead to 2-0 at Real Mallorca.

Chilean international Arturo Vidal headed the visitors in front after less than two minutes, as Setien’s side look to extend their lead at the top of La Liga to five points.

Despite chances at the other end for Real Madrid loanee Takefusa Kubo and Ante Budimir, Barcelona have been in control throughout the first half.

Braithwaite’s goal will give them some vital breathing space in the second half, as the likeable Dane rocketed home Lionel Messi’s nod down from six yards.

The former Leganes man was picked to start ahead of the returning Luis Suarez tonight, and his all action display has justified Setien’s choice.

Suarez is expected to see some action after the break, with the league leaders likely to rotate after three months of no competitive football.