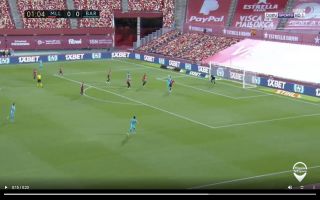 Barcelona’s 2019-20 La Liga campaign has exploded back into life, with Arturo Vidal handing them a 1-0 lead inside two minutes at Real Mallorca.

Quique Setien’s side have a two point lead at the top of the table, over El Clasico rivals Real Madrid, and the former Real Betis boss will be delighted with their start.

Frenkie De Jong recycled a loose ball out to Jordi Alba on the left wing, and the Spanish international whipped a fine cross into the box.

Vidal arrived right on cue, in between two Real Mallorca defenders, to power a downward header past Manolo Reina.

Barcelona won 5-2 at home to Vicente Moreno’s side earlier this season, with Lionel Messi netting a hat trick either side of goals from Antoine Griezmann and Luis Suarez.

La Blaugrana look in the mood to rack up another high scoring win, with Martin Braithwaite and Griezmann unlucky not to extend their lead in the opening ten minutes.