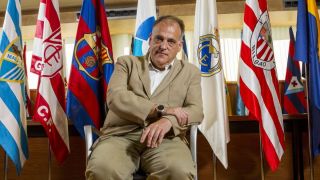 La Liga president Javier Tebas has warned clubs and players that the league will introducing quarantines if social distancing rules continue to be breached.

It follows a number of cases where Spain-based players were found to have been in breach of the guidelines in place to limit the potential spread of Covid-19.

Nelson Semedo returned to Barcelona training on Friday after testing negative for coronavirus having breached social distancing rules, with Diario AS citing Catalan radio station RAC1 as reporting the negative test after he attended a birthday dinner on Monday with more than 20 people involved.

Semedo did not initially report his misdemeanour and trained with his teammates on both Tuesday and Wednesday, potentially exposing everyone at the training sessions should he have tested positive.

The Portugal international is the latest player to breach guidelines after four Sevilla teammates were among a large group of people to meet up, with Real Madrid striker Luka Jovic also accused of flouting the rules.

“If this continues, we could be obliged to look at something we weren’t going to do, which is quarantining,” Tebas told international media via a conference call on Thursday, as cited by ESPN.

“We had planned for an obligatory quarantine the week before the season began. But if this is going to become more normal — three players from one club, one from another — then we will be left with no choice.

“If they aren’t complying with the rules with the due diligence of a footballer, then we would have to take a step back and demand they quarantine. If so many parties and so many barbecues continue…

“It would be a shame because many are complying, so I make a call to all those that are to ensure everyone at their club is following the rules. La Liga’s shown a lot of confidence by not enforcing quarantine and that confidence is diluting as the rules in place are being broken.”