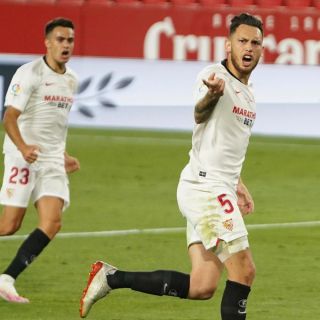 The hosts have dominated at an empty Estadio Ramon Sanchez Pizjuan, with a host of missed chances in the opening 45 minutes.

Ocampos cracked a fantastic effort off the bar on 15 minutes, before Jules Kounde and Luuk De Jong wasted headed openings.

Off the crossbar from Lucas Ocampos! 💥

Lopetegui’s side picked up where they left off after the break, with Tomas Vaclik foiling Joan Jordan fro close range on 48 minutes.

The home side’s pressure eventually paid off as Ocampos calmly slotted home from the penalty spot following a foul on De Jong by Marc Bartra on 55 minutes.

Sevilla ahead in the derby! ⚪🔴

Referee Mateu Lahoz opted not to consult VAR before making his decision, with the former Barcelona centre back incensed by the decision.

Sevilla deservedly doubled their lead on 63 minutes, as former Manchester City midfielder Fernando reacted to a loose ball from a corner to nod home.

😍 @BumperGraham "That is the assist of the season in my eyes"

Fernando with the goal but Lucas Ocampos with a wonderful assist! 🔥#LaLiga #BackToWin pic.twitter.com/NP6h2v5lrO