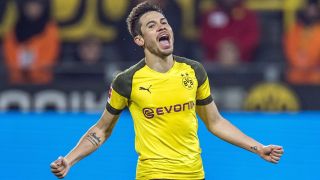 Barcelona are trying to engineer a massive deal for Lautaro Martinez to arrive this summer, and if you believe the rumours they’re going to have to include last summer’s signing Junior Firpo in the package to be able to afford the Argentine.

While that will strengthen them up front, the departure of former Betis man Firpo will leave them with a gap at left back once again, and Mundo Deportivo reckon they’re got a shortlist of replacements ready to go, should the big transfer with Inter happen.

That includes Juan Bernat at PSG, Nicolas Tagliafico at Ajax, Pervis Estupinan, who played on loan from Watford at Osasuna this season, Angelino, recently loaned to RB Leipzig from Man City, and Raphael Gurreiro of Dortmund.

There are some big names in there, and none of them will come cheap. In fact, in the case of an in-demand star like Guerreiro, Barca might well end up paying more for him than they get for Firpo, sending them right back to square one.