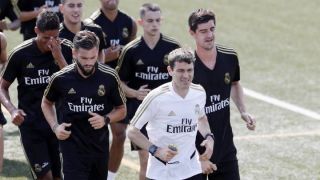 The return of La Liga is starting to go from an abstract possibility to a concrete reality, and it’s time to start getting excited.

Players have been back in training for some time now, and different clubs are preparing in different ways for the onslaught of games that is about to come.

AS have a fascinating story on how Real Madrid fitness coach Gregory Dupont, well known for his work with Los Blancos, will get Zinedine Zidane’s squad into top form.

They say he’s planning a “World Cup” style fitness regime, given the cluster of games on the horizon is similar to the workload of a side aiming for the final of international football’s biggest prize.

Dupont was France’s fitness coach when they won in 2018, so he knows his onions. Madrid play 11 games in the league in just over a month, and these next two weeks on the training pitch will be vital in their quest to win the league.