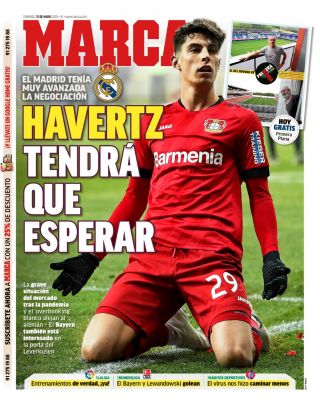 Kai Havertz will have to wait for Real Madrid move

The paper writes that the effects of the coronavirus on the transfer market, plus the already bloated Real Madrid squad, means there’s no possibility the Bayer Leverkusen wonderkid makes the switch to Spain this summer.

There’s no guarantee he will be waiting around for Los Blancos either. Marca also note Bayern Munich’s interest in the youngster, who has been the star of the Bundesliga’s return to action thus far. It’s not often that Bayern let a German gem slip through their fingers, and the Toni Kroos situation still probably stings somewhat.

This is not pure speculation either – Madrid were “very advanced” in their negotiations for the 20 year old, who has racked up 114 league games, with 35 goals and 24 assists to show for it.

It’s no wonder Real and other top clubs like the look of him, now it’s down to Havertz himself to decide how patient he’s willing to be.

Chelsea star explains why he snubbed Real Madrid, claiming “a title with Chelsea is worth more”
12 November 2020, 21:42