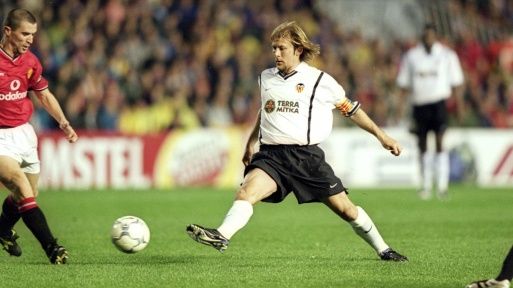 Origins of a Magical Talent

Born in Bilbao, Mendieta started his career at Castellón close to Valencia. He made his bow at just 17-years-old and, curiously, at full-back.

After one season, neighbouring Valencia would come calling. It was a difficult start as his first two years would be spent in their reserve team. However, he made his debut against Cádiz on 13th June 1993. Gradually, he would find his feet in La Liga and featured in 34 of the 42 games of the 1995/96 season as Valencia finished runners up to Atlético Madrid.

With the arrival of Claudio Ranieri and a change in position to central midfield, Mendieta blossomed and fully developed into the talented midfielder we all remember. He scored 10 goals in 30 games during the 1997-98 season and his performances earned him a call up to the Spanish National side, where he would make 40 appearances in total featuring in a World Cup and European Championship.

The following season would yield his first trophy with winning the 1999 Copa del Rey Final over Atlético Madrid with Mendieta scoring an outrageous goal with sublime skill. As he controls the ball from high up with his chest, he swivels with the ball from back to goal to face the goalkeeper and bamboozles two defenders in the process. He duly finished with aplomb and it is a wonderful strike worth checking out.

Mendieta was in the groove (more of that music later) and as captain, he really became the leader of the Valencia ship.

The late 90’s and early 2000 were the midfielder’s peak years. He was twice voted by UEFA in back to back seasons as the best midfielder in the world. He played a huge role in getting ‘Los Che’ to two Champions League finals in a row in 2000 and 2001. A remarkable achievement for the Captain and number six, his favourite number and loyal to him throughout his career.

But that achievement was not rewarded with those two successive final defeats. Firstly, a 3-0 defeat at the hands of fellow La Liga side Real Madrid. Then just one year later, Valencia lost out in even more heart-breaking fashion by losing on penalties to Bayern Münich. Mendieta gave Valencia the lead with a trusty penalty but the game went all the way to the spot kicks with the score deadlocked at 1-1. He would also score in the shootout but football was to be cruel once again for the man from Bilbao.

Playing for Valencia against Barcelona in the Camp Nou in 1999, he scored one of the best goals ever from a corner set piece. A corner kick was taken by Adrian Ilie with precise precision and as the ball arrived to Mendieta in the air and, from outside of the box, launched a rasping strike on the volley to almost break the net. The ball entered the net in the very top corner with a venomous forceful strike as the Barcelona goalkeeper and defender on the line could only watch and marvel as the ball flew in with sheer pace. An improvised attempt as confirmed by the player himself which is still remembered to this day.

Mendieta was deadly from the penalty spot and had an unenviable record. His cool and precise way of stroking the ball low and hard towards either side of the goal caught out many a goalkeeper. It was a method which was simple, yet oh so effective, time and time again.

He scored a remarkable 31 of his 34 penalties, an average of 91.18%, including that penalty in the 2001 Champions League Final and converting his spot kick in the shootout.

After the penalty shootout defeat of 2001 and the toll of two successive Champions League Final defeats, Mendieta wanted a change of scenery with a fresh challenge.

The midfielder was a prized asset and a number of clubs came knocking. One of those was Real Madrid. However, their interest was never concrete due to the fractured relationship between Valencia and Real Madrid meaning negotiations were impossible.

The club who did acquire his services was SS Lazio who signed Mendieta for £47 million pounds. At the time, he was the most expensive Spanish footballer and the sixth most expensive transfer in world football.

It proved to be a highly disappointing season for the player in the capital Roma, mustering only 20 appearances and no goals to his name. His lack of opportunities in being given the valuable game time he needed meant he couldn’t live up to his or the clubs expectation. Nor could he fill the shoes of previous stars of Lazio, Pavel Nedvěd, nor Juan Sebastián Verón. The different style of football in Serie A hindered his own style and was farmed out on loan for two seasons.

Luckily, the 2002/03 season was something of a second coming for Mendieta. He returned to La Liga with Barcelona and reinvigorated himself, to an extent, returning to somewhere near his peak level and known polished performances with four goals in 33 games.

The next season, he had offers from Atlético Madrid and home club Athletic Bilbao. The Bilbao option certainly tugged at his heart having being born in Bilbao and grew up a boyhood fan of the Basque team. Unfortunately for him, negotiations broke down and he never got the chance to play for his team, a regret he has to this day.

Yet with missing out on playing for Athletic Bilbao, it gave him the opportunity to fulfil a dream and that would be to sign Middlesbrough due to his strong passion for English football and dreaming to play in the Premier League.

It was a huge coup for his club and his arrival brought a highly successful time with Mendieta helping Boro to the first silverware in their history in 2004. The club lifted the League Cup with victory over Bolton Wanderers. A band of national and international brothers were formed together with great success such as Juninho, Bolo Zenden, Mark Viduka and current England manager Gareth Southgate. Mendieta was at the heart of the Teessider’s success story.

Mendieta would play with the number 14 shirt, as his favoured number six was with Gareth Southgate and choose 14 in honour of his idol Johan Cruyff.

Unfortunately, due to injuries, he would miss out on playing in the 2006 UEFA Cup Final and progressively those injuries proved to be his downfall.

The player would retire from professional football on 5th December 2007 after a career spanning 16 years with 395 games and 56 goals. His final club would be Middleborough but such was his love for the area and its people, he set up roots in the area.

The midfielder was a very technically gifted footballer known for his leadership qualities. He also possessed a great vision for defensive-splitting passes, demonstrated wonderful versatility and a natural ability to assist and score.

Not only was Mendieta stylish on the field, but is stylish behind the decks too. A career beckons in music as a respected DJ and has already played an impressive amount of gigs such as the renown Benacasim International Festival and even played a DJ set before the 2017 Champions League Final in Cardiff when Juventus took on Real Madrid. The perfect marriage of his beloved football and music.

Gaizka Mendieta is the jack of all trades and as well as being an international DJ, he is a global ambassador for La Liga and is a broadcast pundit for La Liga TV. Yet, he will forever be remembered for his successful footballing career. With the football at his feet, he really was a magnificent magician.