Former Real Madrid goal keeper Iker Casillas has hinted at a potential return to the club, on the fifth anniversary of his final Los Blancos appearance.

The ex Spanish international departed from the Santiago Bernabeu in the summer of 2015, with many fans unhappy with the club’s handling of the situation, due to Casillas’ long service.

However, the Porto keeper indicated via social media that he has unfinished business in the Spanish capital.

The Last Match in Madrid. One day, I will come back! #QuedateEnCasa pic.twitter.com/mFu8WmpCux

Casillas’ appearance in Real Madrid’s 7-3 home win over rivals Getafe on May 23 2015 brought to an end a glittering career with his boyhood side.

The 39-year old made 510 La Liga appearances for Real Madrid, second only to Raul in the club’s all time list, alongside five league title wins and three Champions Leagues.

Casillas announced his retirement from professional football in February, after not playing for Porto since suffering a heart attacking during training in May 2019.

The Mostoles born star will now focus on his campaign for the presidency of the RFEF, after announcing his candidacy in March.

Gerard Pique goes for the jugular in hilarious exchange with Iker Casillas on Instagram
13 July 2021, 22:49 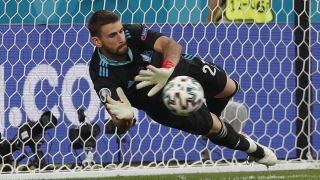