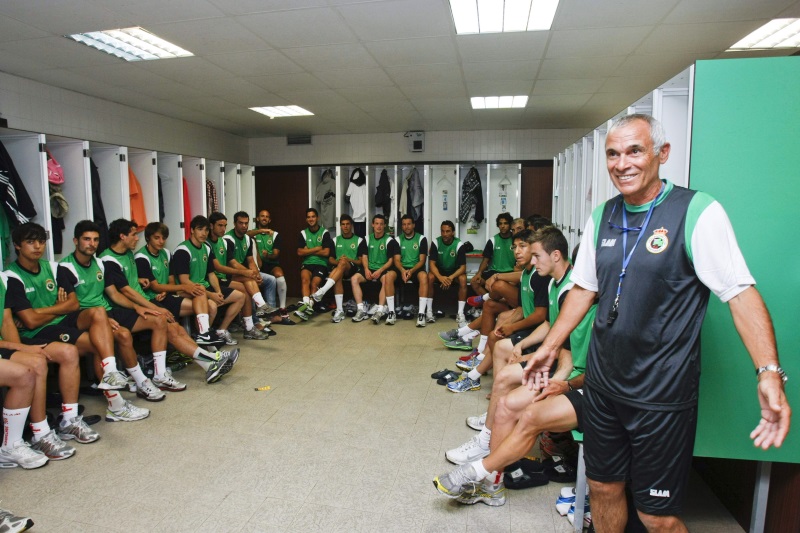 How does the situation at a football club become so toxic that fans feel the need to storm the director’s box during a game to aggressively confront the chairman? Or how does it come to pass that a team can be rapturously applauded by fans for standing around the centre circle from the start of a huge cup tie, refusing to play the game? How did it happen that after these episodes the fans would have to all pitch in together to save the club from disappearing completely? This is the story of Racing Santander, and the demise of a classic Primera team who have played more seasons in the top-flight than any other division in their history.

It is difficult to pinpoint the exact moment at which the club’s demise began, but they’ve certainly had a turbulent two decades. The mid-2000s provided a sustained spell of avoiding relegation from the Primera, but a period also marked by huge drama with the eccentric reign of Dmitri Piterman.

After the club managed to get rid of the American-Ukrainian owner who treated the club like it were a toy, their highest achievement came in 2008, with a 6th-placed finish in La Liga securing a UEFA Cup spot and reaching the semi-finals of the Copa del Rey.

This fantastic campaign was managed by Marcelino Garcia Toral, the highly rated Coach who went on to manage Villarreal and Valencia. Celebrations proved to be short lived, as after finishing sixth Marcelino decided to walk away from the club, leaving a European campaign and Primera football behind him, to join Real Zaragoza in the second tier.

Meanwhile, Los Montañeses rubbed shoulders with Manchester City, Paris Saint-Germain, Schalke and Twente in the UEFA Cup in 2008/09, but just missed out on qualifying for the knockout stages on goal difference to the French giants. This would prove to be the tallest the Cantabrians would stand for a long time, as mounting debts and relegation scraps followed.

January 2011 is a month that will be considered pivotal in the history of Racing Santander. Indian businessman Ahsan Ali Syed, fresh from a failed attempt to purchase Blackburn Rovers, finally completed the purchase of a European football team. He promised to clear the club of debts and set his sights on challenging La Liga’s big two for silverware and glory.

Syed’s first port of call was to fire the manager, Miguel Ángel Portugal, and reinstate Marcelino as Coach once more, pledging a transfer budget of €50m.

The origin of Syed’s supposed wealth is – to say the least – dubious, as Verdiblancos fans soon discovered to their detriment. Syed was the founder of a company called Western Gulf Advisory, which claimed to be an asset management company, but is accused of defrauding hundreds of millions of dollars from businesspeople around the world.

A 2011 article in the Sydney Morning Herald, which details accusations of Syed defrauding $100m Australian dollars from businesses in the country as well as missing 12 payment deadlines to alleged victims, directly calls Syed an “accused fraudster” in the headline.

Western Gulf Advisory was established in Bahrain with the legal minimum investment in the country needed to set up a business, $53,000. Company accounts show a $1.1bn “loan from a related party,” that proved insecure and carried no interest, and didn’t need to be repaid for 10 years. The modus operandi of the apparent scam was to promise hundreds of millions in loans to businesspeople for advanced fees, only to run away from the deal once the first advanced payments were made.

The asset management business was based in Bahrain and Switzerland, and arrest warrants were put out for the Indian businessman in both countries. Syed, like any conman operating on bravado, publicly rejected the warrants, extraordinarily exclaiming in an interview with Vanity Fair, “Let them chase me. I will pray. We’ll see which is stronger, their persecution or my prayers. I’ve done nothing wrong. I pray to God to save me from these demonic people.”

It was later revealed in the Spanish press that Syed never intended to keep hold of the club for longer than three months. Instead, his plan was to flip the club. Buy for €3m and sell for €15m to the Bahraini royal family. Instead, the Arab Spring breaking out in 2011 prevented the monarchs from attending the La Liga match against Real Madrid as guests of Syed, the game the Indian was planning on using as the ultimate charm to woo the Bahraini royals into buying the club.

That summer, Marcelino left, declaring that Syed “tricked us all” and “failed to keep a single promise.” Racing were relegated finishing bottom of La Liga in 2012 and dropped out of professional football completely the next year, into the regionalised third tier of Spanish football. From this level, there is no direct promotion to the second division, but rather teams who finish at the top of the four tables then compete in post-season playoffs to determine who goes up.

Protests in an incredible cup run

In April 2013, Syed was finally deemed unfit to run the club, and Racing managed to get him to relinquish his power. However, financial problems continued, and the 2013/14 Copa del Rey run provided extraordinary scenes in Santander. After overcoming the challenges of L’Hospitalet and Leganés, both also playing in the third-tier Segunda B, Los Montañeses incredibly managed to claim the scalp of top division Sevilla in the round of 32.

It was then revealed that Racing players went months without pay, starting in September 2013. By January, they were all set to take on La Liga side Almería in the Copa. For the first 20 seconds of the game, the players refused to take part as a protest against the ongoing situation in the club. By the 60th minute of that game, it reached boiling point in the stands, and some fans began making their way from their usual seats toward the directors’ box.

Bottles and other projectiles were thrown towards the decision makers at the club, but security managed to escort president Ángel Lavín to safety. This was the reaction of years of mismanagement of financial catastrophe at the club, dropping them rapidly from the most glorious years of their history to the brink of collapse.

Remarkably, Los Verdiblancos went on to win the tie, and would face Real Sociedad in the quarter finals. Racing were the only team not in the top-flight to reach that stage of the competition. After the scenes at Almería, the players warned they would repeat the protest if they were not paid in time and if the board and president refused to resign.

The board and president remained, resulting in further incredible images from the El Sardinero stadium. Just as the game kicked off, the Racing players lined up around the centre circle and linked arms, refusing to take part in the encounter. Real Sociedad players passed the ball among themselves. This lasted less than a minute, when referee Jesús Gil Manzano summoned the Racing captain, asked him would this be the case for the entire game, and upon confirmation the game was abandoned.

It was an extraordinary end to a remarkable cup run that could have seen the club earn a lot of money and plaudits. But the fans sided with the players, outraged and the years of terrible decisions that led to this disgrace, and rapturously applauded and chanted for the players in their decision.

Yet, darker days would come. In 2015, with further mounting debts and incomings limited to the realm of semi-professional football, the club faced liquidation. A year prior, they opened a process known in Spain as ‘ampliación de capital,’ an increase in capital in the club that involves the creation and sale of extra shares in the club. The aim of this is to raise money in the institution, usually because of an imminent financial threat. Other high-profile cases have been seen at clubs such as Real Oviedo, Murcia, and Eibar in recent years.

An association of former players got involved to raise money and awareness. As well as that, fans of the team came together to buy shares and become part-owners of their club, hoping to keep the club alive.

With the threat of extinction looming large, together they managed to raise €2.3m by April 2015, more than enough to guarantee the survival of the then 102-year-old institution. The sum raised also prompted an offer from local lawyer and businessman, and former Racing player, Manolo Higuera, who would go on to become president of the newly saved Racing Santander.

In 2019, Ángel Lavín, the president that was targeted by the furious fans during that Almería cup game, was handed a three-and-a-half year prison sentence for his mismanagement of the club. The court case came from a complaint presented by the association of former players and Manolo Higuera.

Racing Santander is one of the most historic clubs in Spain, an original founder of La Liga in 1929, and beloved by its people. Through these tough years slogging in the third tier, they still managed to draw crowds of about 9,000 to their ground, and continually fought for playoff spots. Last season, 2018/19, a blistering style of attacking football finally saw good times return to El Sardinero with an away goals victory over Atlético Baleares in the playoffs.

Unfortunately for Racinguistas, their side sit bottom of the 22-team league at the point at which the season was interrupted due to the pandemic and are facing a return to third tier that is notoriously difficult to get out of.

Regardless, the feeling of being out of the hands of fraudsters and criminals while now being directed by a former player and owned by fans can offer some solace. If Racing do go on to be relegated whenever football resumes, they will know that they’ve been in this position before, and have managed to fight their way back out of it.