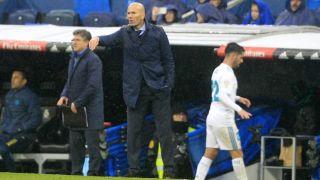 La Liga prepares for the time of the substitutes, with bigger teams set to benefit

The return of La Liga is growing closer than ever, and it’s now looking more likely than not that the season is played to a conclusion. Players are training in small groups, and that will be ramped up over the next few weeks, as more parts of Spain release their lockdown.

When the season does get going again, there are going to be some serious changes.

Firstly all games will be behind closed doors. There will be countless social distancing measures in place, to prevent as much potential viral transmission as possible.

In tactical terms, what will be interesting is the increase to 5 substitutes allowed per game, alongside the intense schedule. The front page of AS refers to the “time of the subs”, as they will be so important.

They note that Zinedine Zidane uses the fewest – but may have to change his habits; while city rivals Atleti get the most productivity from their bench during games.

It will be interesting to see how it pans out, although it seems almost certain to benefit the big clubs.