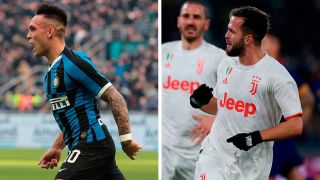 Barcelona in open pursuit of Miralem Pjanic and Lautaro Martinez

Spanish radio station Cadena Cope are always up to date with the latest football news, and last night Manolo Oliveros had interesting news from Catalonia.

He reported that Barcelona now “admit” their interest in Lautaro Martinez and Miralem Pjanic of Juventus. They are this summer’s priority targets, and the Spanish champions will go “all out” to sign them.

What do their chances of signing them look like?

Well in the case, of Pjanic, very good. Juventus’ new manager Maurizio Sarri isn’t that interested in using him, and apparently has his eyes on his trusted lieutenant Jorginho at Chelsea. If Barcelona want Pjanic, they’ve got players they can trade, and his fee won’t be sky high.

Martinez is another matter. While he will be far more expensive, he at least has a fixed release clause that the Blaugrana can eventually pay if it comes down to it. They will hope to reduce that, also by trading players, and in an ideal world they can get both of these top targets in while getting rid of significant deadwood.