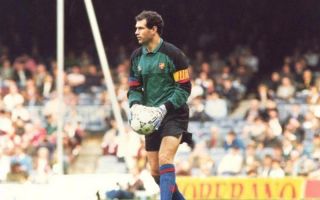 Former Barcelona goalkeeper and Spain international Andoni Zubizaretta is set to step down as sporting director of French giants Marseille, as reported by RMC Sport.

Zubizarreta served as Barcelona sporting director between the summer of 2010 and January 2015, when he was sacked by club president Josep Maria Bartomeu, having been appointed by his predecessor Sandro Rosell.

He subsequently took up the post at Marseille the following year and held a similar role in sporting direction for Athletic Club Bilbao the previous decade.

Zubizaretta is Spain’s fifth most capped player of all time with 126 appearances and he featured in four successive World Cup tournaments between 1986 and 1998.

He clocked up a notable 840 first-team appearances at club levels across successful stints with Athletic Bilbao, Barcelona and Valencia – winning 15 trophies in total including six La Liga crowns.

Zubizarreta is one of the most experienced and reputable sporting directors and his availability is likely to generate interest among Europe’s leading clubs this summer.