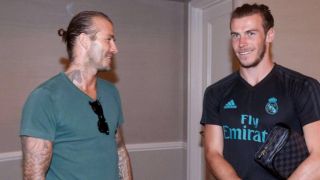 Gareth Bale has been heading towards the exit at Real Madrid for some time now, but it’s proving difficult to find a taker for him.

He’s on such enormous money in the Spanish capital that neither the club nor he have yet been able to find a suitable solution to take him on.

He came close to a move to China last summer, only for the club to pull the plug on the deal.

Now AS are reporting that the Welshman is pushing for a move to Major League Soccer in the United States – but as they rightly point out, who on earth there can pay him the crazy money he is on in Spain?

David Beckham’s newly formed Inter Miami franchise would be a dream landing spot for both Bale and the team in terms of visibility, but they don’t have the kind of money necessary to pay Bale’s vast annual salary. The salary cap in the MLS would mean that on his current wages, the former Spurs man would be on 60 times what most of his teammates would be earning in Miami. It’s hard to imagine the club considering that a sustainable situation, even with Becks in charge.

So far, Bale has chosen to take the money and stay in his rather unhappy stasis in Spain. Whether that will change this summer will become clear in the weeks to come.

Jose Mourinho responds to question asking why Gareth Bale has taken so long to get going at Tottenham Hotspur
3 March 2021, 19:26