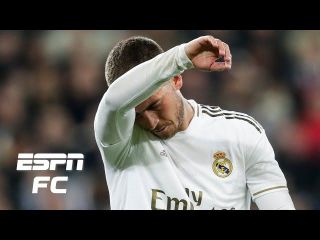 Eden Hazard had an injury hit season for Real Madrid and is 29, leading some to conclude his €100m signing can already be called a mistake, with Los Blancos waiting too long to bring him to the Spanish capital

They debated that exact point on ESPN, and Don Hutchinson said he thought that given the price tag, they probably should have moved a season or two earlier.

Of course, Hutchinson concedes that this he can only say this with hindsight, and all the talking heads present agree that signing him was a no-brainer at the time.

There’s also just the plain fact that Chelsea weren’t willing to sell, until the Belgian was into the last 12 months of his contract, regardless of the player’s fluctuating desire to stay or go.

He still has years left to show that he can make that fee worthwhile, but he will be as frustrated as anyone that he hasn’t been able to hit the ground running.

You can see the clip here: