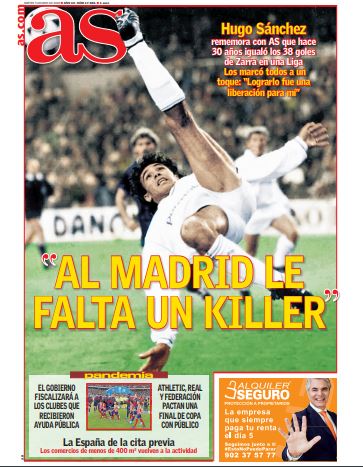 Hugo Sanchez, famous former Real Madrid striker, has said that this modern incarnation of his old team “lack a killer”, AS report on their front page, which you can see here.

Since the departure of Cristiano Ronaldo two seasons, the team have really struggled to find a player to replace him and score as regularly as he or Sanchez used to do in their respective periods as top dog at the Santiago Bernabeu.

Karim Benzema has been the number 9 there for almost a decade now, and despite being a brilliant player for helping teammates score goals, he’s never grabbed enough himself to quieten the doubters entirely.

Madrid is a unique place in that regard, and even the world’s best have noses turned up at them if they don’t match the records of the greats.

A year ago they signed Luka Jovic to try and be that “killer”. It’s fair to say that hasn’t worked out yet. But if they want to return to the very top, they’re going to have to find their next Sanchez.