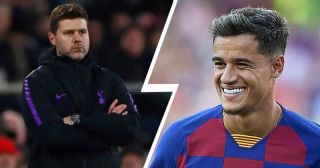 Diario Sport builds on reports from the English press that the Premier League club, who are reportedly on the verge of a Saudi-backed takeover, are lining-up the ambitious double swoop.

Now it is said that the theoretical appointment of former Tottenham boss Pochettino – to replace current incumbent Steve Bruce – is directly linked to the club’s intentions of landing Coutinho.

Pochettino was thought to be the driving force behind interest from Spurs in the playmaker last summer, but no deal was completed with the player instead joining Bayern Munich on a loan deal.

Indeed, Pochettino worked with Coutinho during their time at Espanyol while it has previously been suggested he attempted to bring him to Southampton before he moved to Liverpool.

Bayern– where Coutinho remains on loan – have an option to buy the Brazil international for €120m at the end of the campaign but multiple reports suggest this will not be exercised.