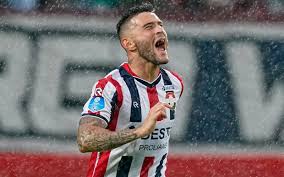 Former Espanyol midfielder Pol Llonch wants to return to the club this summer, despite being reportedly linked to rivals Barcelona.

Llonch has enjoyed an eye catching season with Eredivisie side Willem II, with an ever present role in Adrie Koster’s side.

However, as the 27-year old has not agreed an extension beyond June 2021, rumours have circulated that he could return to Spain, with Llonch clear on his intentions.

“I would one day like to play in the English, Spanish or German league,” according to a report in Diario AS.

“But the club of my dreams is Espanyol. In fact, I would prefer to play for Espanyol than for Barcelona.”

Llonch admitted he remained a fan of Abelardo Fernandez’s side, despite his exit in 2015.

He joined the club’s reserve side from Catalan local side Hospitalet in 2014, but never made a first team appearance under either Sergio Gonzalez or Constanin Galca.

He moved onto neighbours Girona for a season, followed by spells with Granada and Wisla Krakow, before joining Willem II in 2018.

However, the club remain in serious relegation danger, rooted to the bottom of the table, six points away from safety.