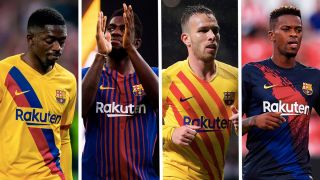 Barcelona are looking to regenerate their team extensively this summer, and the plan has been to sell off some of the the bloat of squad players they tend to accumulate.

While the Catalan club generate vast quantities of cash, they struggle to keep incomings in line with outgoings, and they’re now in a position where they need to shed some players in order to create the liquidity to buy again.

That’s lead to a host of their squad players being credibly linked away to other teams.

We’ve heard about Nelson Semedo’s links to Premier League sides, Arthur Melo being offered to Juventus as part of a swap deal, even young canteranos like Carles Alena maybe being moved on permanently with buy-back clauses in the deal. Arsenal are even asking for information about Ousmane Dembele’s future.

Today alone, Junior Firpo has been linked a transfer with Roma; just a year after the club bought him from Real Betis, and Samuel Umtiti, who has been drifting towards the exit at the Nou Camp for some time now, is interesting Napoli,

But Umtiti’s case sums up the issue that Barcelona are now facing. The Catlan club are asking €50m for the centre-back, a fee that wouldn’t have looked too crazy a year ago for a Champions League and World Cup winning central defender of prime age.

But the coronavirus pandemic has crashed club finances worldwide, and very few players – if any – will move for that kind of money in the next few months.

Barca’s fire sale is now set to take place in a summer where transfer fees are plunging, and the club have some big decisions to make.

Do they stick with what they’ve got for another season and hope that the market recovers in the next 12 months? Or do they sell into the depressed market anyway and hope to make up for it by buying players at a lower price too?

The swap deals we’ve heard suggested in the last few weeks provide one potential solution, with other top teams like Juventus in similar financial situations, yet equally keen to change their squad around this summer. The part-exchange deals we see suggested every window but rarely see pulled off might now have their time.

It’s a very difficult situation for a club with well-documented cash-flow problems and mounting debts, and we may see the quality of players on the pitch this season dip dramatically as the Blaugrana adsorb the vast impact of the crisis.

Ousmane Dembele: “We’re facing one of the favourites to win the Champions League”
15 February 2021, 9:11