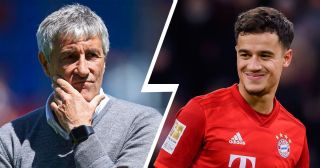 Position switch could mean Philippe Coutinho gets another chance at Barcelona

Philippe Coutinho’s time at Barcelona looked to be over, but according to a report in Marca today, he may have a future yet.

The Spanish paper says that manager Quique Setien – who might have been expected to be reaching the end of his time at the club by now if things had carried on as normal – is coming round to the idea of keeping the Brazil midfielder around.

The Cantabrian manager apparently sees a future for Coutinho as a central midfielder in his elegant passing system. It’s the kind of ambitious idea we can certainly see him trying.

The piece says that Ernesto Valverde’s use of the player on the lefthda been to his detriment in his 18 months in Catalonia.

After a bad year at Barca, and another disappointing spell at Bayern Munich this season, the need to raise some money for other improvements made the former Liverpool player’s future uncertain.

But if Setien would rather use him than buy someone new, it might tempt the club to keep both of them around to give it a go.