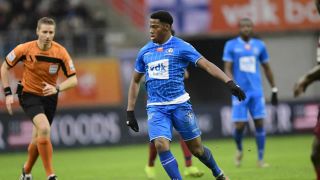 Lautaro Martinez had his breakout season in Serie A this year, and in less than a year has done so well that’s he’s being linked with a transfer to Barcelona this summer.

Inter Milan are desperate to keep hold of the Argentina star, but they are also aware that should Barca match his €111m release clause, they’ll have to let him go. Sensibly, they’re scouting for replacements, and according to today’s copy of Mundo Deportivo, they’ve found one.

Jonathan David is the latest success story at the transfer genius club Gent, and he’s apparently Antonio Conte’s first choice to replace the explosive Martinez, should he go.

David’s electric pace is a huge weapon, and one can imagine him linking up nicely with Romelu Lukaku in the way that Lautaro has. The Belgian club will only demand around €15m for their striker, having previously wanted €25m before the coronavirus hit.

This news shouldn’t excite Barcelona too much – Inter would be crazy to not be making contingency plans, but that doesn’t mean they’ll let their star go without a fight.