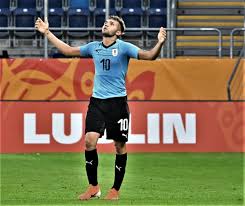 Atletico Madrid forward Nicolas Schiappacasse wants to make a summer move to Uruguayan side Penarol ahead of the 2020-21 season.

However he has not senior appearance for Diego Simeone’s side, with low key loans at Rayo Majadahonda and Parma last season.

He joined Portuguese club Famalicao at the start of 2019-20, however he now wants to return to his native country.

“There was contact from Penarol (in the January window), but I was advised to stay, he told an interview with 890 Sports, reported via Mundo Deportivo.

“Penarol is Uruguay’s biggest club, with a long history. I also think playing for them could help my chances with the national team.”

Schiappacesse is under contract at Atletico Madrid until June 2021, however the club would lose him on a free transfer if he does not sign an extension before the end of 2020.

The La Liga giants are unlikely to offer him a new deal, and will push for a transfer in the coming months.

Schiappacasse is currently rated at around €1M, but Atletico could be prepared to accept offers in the region of €800,000.