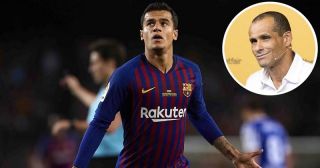 Former Barcelona player Rivaldo has backed Philippe Coutinho to rediscover his best form if he’s able to make a move to Chelsea this summer.

The switch has been suggested for some time, and it seems like the Blues are genuinely interested in the Brazilian despite his poor play over the last two seasons.

They would be making a smart acquisition, according to Brazil legend Rivaldo:

“After a season and a half at Barcelona and one more at Bayern Munich without managing to have the same success he had at Liverpool, I believe that this chance Philippe Coutinho now has of continuing his career at Chelsea could be a good option,” the former striker said in quotes picked up by The Metro.

“He is still a regular in the Brazilian national team and just hasn’t been lucky enough at Barcelona or Bayern, but perhaps that could change with a new club and I believe this would be a nice opportunity for him to get back to his best football at Chelsea,” Rivaldo went on to say.

He’s certainly got a lot of confidence in the attacking midfielder. One wonders whether this is because he’s a fellow Brazilian, or perhaps because he wants his old club to get the best possible deal for their depreciating asset.

Either way, he’s certain that a return to the Premier League is just what Coutinho needs to get things back on track.

Now we just need to wait and see if Chelsea agree.