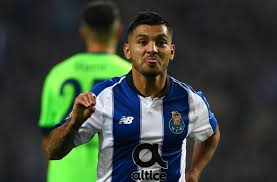 Sevilla have reportedly joined the growing list of European clubs considering a move for Porto winger Jesus Corona this summer.

The Mexican international has been linked with a switch away from the Primeira Liga club, after establishing himself as a key player for Sergio Conceicao’s side.

According to reports from Portuguese newspaper A Bola, Julen Lopetegui will now look to challenge a host of top clubs with a bid.

Serie A pair Inter Milan and AS Roma are reported to be tracking him, alongside Everton, West Ham and Schalke 04.

Corona has a release clause of €50M, however, no side are likely to pay that much, with offers set to start around €30M.

Lopetegui is in line to bring in new faces this summer, with Rony Lopes and Lucas Ocampos linked with big money moves to Fenerbahce and Borussia Dortmund respectively.