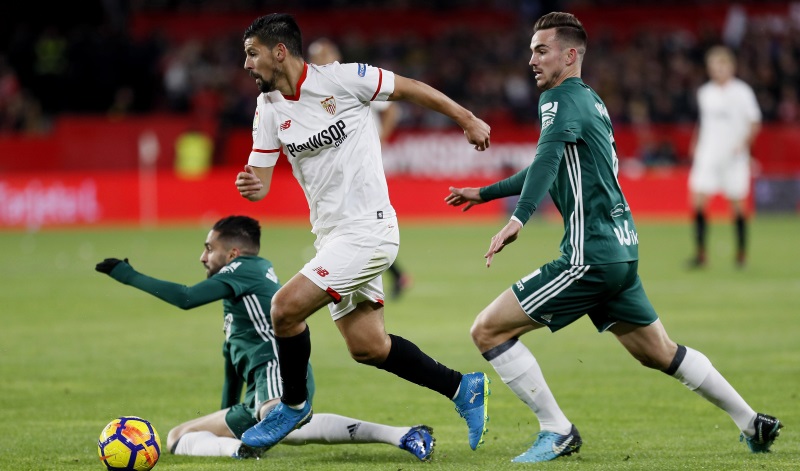 Few matches in European football are as fierce and closely-fought as the Seville derby. Sevilla and Real Betis played out a true classic encounter in January 2018, as David Whitworth recalls.

Flamboyant, colourful and ferocious – the hallmarks of the biggest city derby in Spanish football. A fixture bringing together downtown Real Betis and their arch city rivals Sevilla, from the swanky central Nervión area of the Andalusian capital. It was Sevilla’s home which was the location for the 180th derby edition on 6 January in 2018; giving the fixture an added festive spice as it was held on the night of Three Kings – Spain’s version of Christmas Day.

There was the suaul terrific festival atmosphere to welcome the two teams at the Estadio Ramón Sánchez Pizjuán. The derby, as is notorious, started at a frenzied pace and it was Betis who made a blistering start with their midfield dynamo Fabián Ruiz scoring after just 34 seconds with a rasping left-footed strike. It set the tone for this classic encounter as three more goals created a topsy-turvy first half. Forward Wissam Ben Yedder equalized for the hosts with a lovely flick over Betis goalkeeper Antonio Adan before defender Zou Feddal put Betis back in the ascendency with a powerful header. Simon Kjær drew Sevilla level once again to close out a thrilling first half deadlocked at two goals apiece.

Fans tried to catch their breath, gripped by a scintillating first half. However, the second half brought further drama in mass dosage with another four goals served up. Between the 60th and 70th minutes, three further goals arrived. In the 63rd minute, a beautiful team goal would be finished off by Betis’ Danish left back Riza Durmisi, being the pick of the goals. Betis swiftly doubled their advantage two minutes later thanks to striker Sergio León – fittingly netting on his birthday. But back came Sevilla again in the 67th minute with central defender Clément Lenglet nodding in as the see-saw nature of the encounter continued.

With the score at 3-4, a chaotic scene resembling a basketball contest ensued with each team attacking one other in a thrilling tug-of-footballing-war finale, culminating with a breakaway Betis goal by winger Cristian Tello in the final minute of an extraordinary game. It clinched the derby spoils for the green and white half of the city, their first in Sevilla’s stadium in six decades. Ecstasy for Betis but despair for Sevilla. A captivating game ending 3-5 after a titanic tussle.

“It was a tremendously entertaining footballing match and the perfect Christmas gift for our supporters,” said Joaquín, the delighted Betis captain.

Rivalry aside, the game lived up to the billing and was an outstanding game of football befitting of one of the greatest derbies on the planet. These two eternal city rivals await the date to lock horns again and celebrate the next instalment of the cities spectacular footballing centrepiece. Bragging rights for the next derby delight.