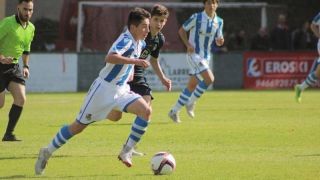 Barcelona have poached Real Sociedad teenage star Dani Rodríguez and will integrate him into their La Masia youth system, as per Diario Sport.

The 14-year-old is said to be one of the most highly rated youngsters in Spanish football and his signing is viewed as being somewhat of a coup for the Blaugrana.

It is said that the Catalan giants pipped a number of other interested clubs for the player including Paris Saint-Germain, while La Real are said to be irritated about losing Rodriguez.

It is unclear as to what the player’s best position is, but scouting reports say his left foot is particularly valued and he can play either on the wing or further in-field, which is what Barcelona scouts reportedly see him more in the latter.

As cited by the report, Noticias de Guipuzkoa have claimed that Real Sociedad have moved to replace the player with Dani Díaz, a young star of Racing de Santander.