The 23-year old has caught the eye with the Argentinian club this season, and has been rewarded with a first senior cap for Lionel Scaloni’s side.

According to a report from Mundo Deportivo, Los Blancos are the latest side to show an interest, after Valencia were linked with him last week.

Zinedine Zidane is reportedly on the hunt for defensive reinforcements, after low key start for Eder Militao at the club.

Los Che are also interested in a new centre back, with Ezequiel Garay out of contract this summer, and Elaiquim Managal’s deal unlikely to be made permanent.

However, the Spanish pair are not the clubs monitoring the progress of Martinez Quarta, with Inter Milan and Manchester City also linked with a bid in the coming weeks. 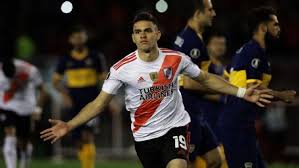