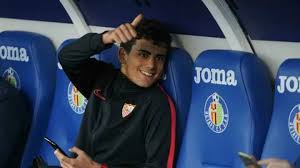 Sevilla are reportedly working a new long term contract for highly rated defender Pablo Perez – as transfer interest in him begins to grow.

The 19-year old has starred for the club’s youth team in 2019-20, after joining from local side CD Nervion last summer.

Manager Julen Lopetegui has since included him in first team training and match day squads in recent weeks, but he is yet to play in La Liga.

But despite not making a senior appearance for the club, the Spanish U19 international is already attracting attention from clubs across Europe.

According to reports from Marca, Manchester City, RB Leipzig and Ajax are all closely monitoring his rapid progress in Andalucia.

However, director of football Monchi is set to meet with Perez’s agent, to negotiate new deal, and secure his future at the club.

If a new contract is not agreed before the start of the 2020-21 campaign, Perez could be free to leave the club without a transfer fee.