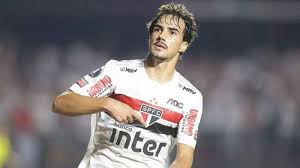 The 21-year old is highly rated by the Brazilian side, after being fast tracked through the youth ranks and into the first team.

According to reports from Diario AS, Real Madrid have been scouting Gomes since as far back as early 2019, but they are not willing to pay his current €50M release clause.

However, Los Blancos are aware of reported interest from La Liga rivals Barcelona and Seville, as well as Dutch giants Ajax.

Sao Paulo’s asking price appears to be the main stumbling block to any potential deal for the Brazil U23 international, with transfer business set to be scaled down across Europe, due to the financial impact of the Covid 19 outbreak.

Zidane’s side are also hopeful that Gomes’ friendship with Rodrygo Goes could provide an advantage in negotiations, with a lower bid potentially being submitted in the coming months.