The Moroccan international is currently on loan at Bundesiiga giants Borussia Dortmund, but his two year loan is set to expire at the end of the season.

Zinedine Zidane has previously stated his desire to bring him back to the Spanish capital, with the potential of a new long term contract.

However, that is yet to be matched by action, leading to speculation that the 21-year old may look to move on.

According to reports from the Daily Mirror, Frank Lampard is a big fan of Hakimi, and could look to make a summer move.

However, Chelsea are not the only interested party, with Dortmund and Bayern Munich also monitoring the sitution.

Hakimi does reportedly have a release clause of €55M, and with Los Blancos under no pressure to sell, they could hold out for the full fee. 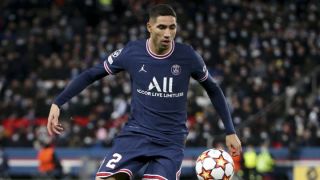