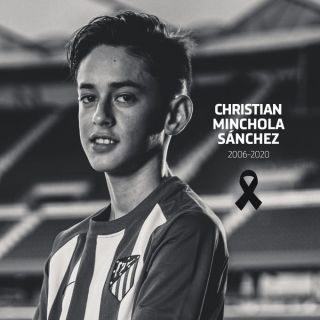 The highly rated striker joined the club’s youth academy at the start of the 2013-14 season, and played in seven different youth categories with Los Rojiblancos.

The club confirmed the sad news via an official statement earlier today, with club president Enrique Cerezo paying tribute to the teenager.

“We are dismayed at the sad news of the death of our player.

“The entire Atletico Madrid family will be beside Christian’s family during this time of immense pain.”

The club CEO Miguel Angel Gil Marin echoed Cerezo’s comments, and confirmed the club’s flag would be flown at half mast as a symbol of respect for Christian.

Marin also passed on a message of support to all Atletico fans and their family members battling against, and losing loved ones, to the ongoing Covid 19 virus.

Spanish Prime Minister Pedro Sanchez has since introduced an increased set of containment measures to the country, in a bid to reduced the amount of cases and rising death toll.