Zinedine Zidane has been linked with a potential bid for a new attacker ahead of the 2020-21 campaign, with rumoured doubts over the futures of Luka Jovic and Gareth Bale.

Los Blancos were linked with the Nigerian international, prior to Jovic’s arrival last summer, but opted against a move for the 23-year old.

However, according to reports from UK newspaper the Daily Star, they are now set to rival Premier League side Manchester United with a big money offer, after he netted 13 league goals so far this season.

The report states that Lille currently value Osimhen in the region of €80M, however neither side is likely to pay that much for the former VfL Wolfsburg man.

Real are only likely to pay around €40M, but Ole Gunnar Solskjaer’s side could go higher, if they generate funds from player sales in the coming months. 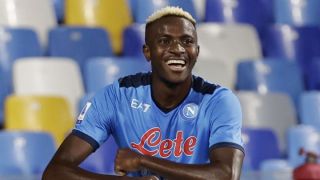