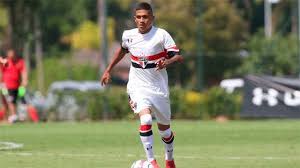 Barcelona will make a summer move for Sao Paulo’s highly rated teenager Gustavo Maia, according to reports from the Brazilian club.

Sao Paulo executive manager Alexandre Passaro told an interview with ESPN Brazil, via Diario AS, that negotiations have already begun.

Barcelona have reportedly agreed to pay an initial €1M for the 19-year old, with a further €3.5M to secure 70% of his economic rights.

“We have a purchase option (on Maia) at €1M if Barcelona want to buy him during the season.

“The deal is structured in this way to prevent losing players in the middle of a domestic season.”

The report states that Barcelona were happy to pay the initial €1M, but have since by delayed by the restructuring of the payment schedule.

However, that us not expected to force the deal to collapse, with Barcelona set to secure a majority ownership transfer, will Sao Paulo retaining a 30% stake in the highly rated forward.

Maia has impressed for the club’s underage sides, as well as the Brazilian U16 and U17 sides, but he is yet to make a senior appearance.