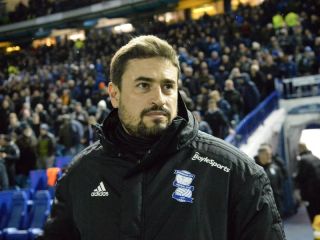 Birmingham City boss Pep Clotet has expressed his deep concern at being separated from his family, who are in Spain, during the coronavirus pandemic.

Clotet’s wife Vanessa along with their young children Max and Helena – aged one and three respectively – back to Spain last week in the belief that it would be safer.

However, soon after returning to their hometown of Igualada – close to Barcelona – the entire Catalonia region was plunged into lockdown.

Clotet’s parents Ramon (aged 71) and Maria (68) are also in the area while the Birmingham boss is now isolated from them in the Midlands in England.

It was confirmed on Thursday that all British football would not be resuming until late April at the earliest, although there are fears that this could be delayed much further due to the spread of the virus.

Clotet has managed youth and B teams for Espanyol and Malaga, but has been in coaching circles in England across the past seven years – in roles at Swansea, Leeds, Oxford and now Birmingham.

“I am so worried,” Clotet told the Daily Express. “At the moment, everything is OK with the family. We are all still alive. In Spain we have been more aware than people were in England. It hit us earlier but it is still on an upward curve.

“But we know what is coming. I don’t think people in England do. In Spain they were getting another 2,000 cases a week.

“We felt they were controlling things better in Spain and where we live there is better, so we decided they should go back. It was safer so I rushed them to the airport, but as soon as they got to Igualada there was a major outbreak and the police closed it.

“We have a small farm there, as well as a house, so they could be pretty isolated. My parents are locked down in the house and my brother calls every few hours. It is incredibly worrying.

“I am caught between two worlds. I feel I cannot do my job properly. I keep thinking: ‘Maybe I should go back?’ But I cannot go back because I am working.”