Premier League side Chelsea have been linked with a move for Ajax star Andre Onana, despite the Cameroonian international also being targeted by Barcelona.

Frank Lampard is reported to be in the market for a new goal keeper ahead of the 2020-21 campaign, due to growing doubts over the future of Spanish international Kepa Arrizabalga at Stamford Bridge.

Onana has earned rave reviews in the Dutch Eredivisie after establishing himself as the club’s first choice goal keeper back in 2016.

The 23-year old had been linked with a move to Barcelona, if current first choice stopper Marc Ter Stegen was lured away by Bayern Munich, but that now looks to be unlikely with his current deal running up until 2022.

That could now open the door for Lampard’s side to make a move, with the majority of No.1 spots across Europe’s top clubs already filled.

Onana is also under contract at the Johan Cruyff ArenA until 2022, and the Dutch side are unlikely to sell for less than €60M, according to reports from Goal.com. 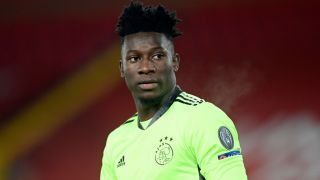 Andre Onana admits his first choice this summer would be to return to Barcelona
14 December 2021, 18:49

Ajax wait for Valencia goalkeeper Cillessen as Onana replacement
22 May 2020, 11:46