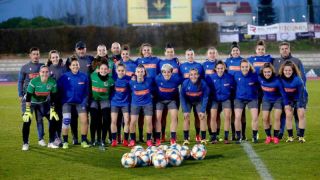 Real Sociedad have corrected a report in Marca (that has subsequently been edited) which claimed that two players from their women’s team had tested positive for coronavirus.

The identity of the two players had not been made public but the report alleged to confirm that they are from the squad of the club’s women’s team, with no confirmed cases as yet in the men’s team.

The report cited the immediate reaction from Spanish FA president Luis Rubiales, who say that all the correct measures and procedures are being taken to deal with the cases.

“At this time, no player from our team has taken the COVID-19 test and, therefore, there are no positive results,” the club wrote on Twitter, directly addressing the Marca account.

“We ask for prudence and the informative rigour that this situation requires. Thank you.”

It coincides with the news that La Liga has confirmed that all Spanish football has been suspended for the next two weeks in light of the spread of the coronavirus.