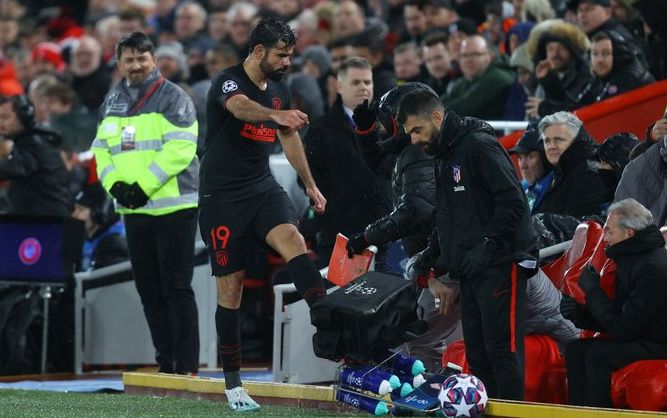 Diego Costa has not had a good night so far at Anfield.

After being put through on goal within 30 seconds of the start of the match, he somehow contrived to shoot wide with the goal beckoning.

Costa’s ire would have been further fuelled directly after half-time as Diego Simeone hauled him off after only ten minutes of the restart at Anfield.

Having only returned to action in recent weeks after injury, the last 16 knockout tie was targeted by the club as the perfect time for Costa to have back, having built up some fitness for the second leg.

However, it has not gone quite to plan for the Spanish international, after his early miss, Costa did very little in the game as Liverpool began to exert their dominance over their opponents.

Atleti’s manager decided to make a change to try and rest the game back into his teams control and took off Diego Costa and replaced him with Marcos Llorente.

Costa was clearly upset and walked slowly off the pitch shaking his head and kicked a sports bag in frustration as he headed toward the bench.