RB Leipzig striker Timo Werner is one of the strikers on Real Madrid’s summer shortlist according to a report in Marca.

It is claimed by the outlet that Madrid will once again look to bolster their attacking options this summer as they do not believe they have replaced the goals of Cristiano Ronaldo since his €100m move to Juventus in the summer of 2018.

The Germany international has already netted 27 goals this season for high-flying Leipzig including 21 in 24 Bundesliga appearances alongside a further four in the Champions League.

Karim Benzema has carried the weight for Madrid in terms of goals since Ronaldo’s exit with both Luka Jovic and Mariano Diaz both fringe players in the time since.

Mariano scored in Sunday’s El Clasico against Barcelona but he has played for just two minutes in La Liga all season while Jovic has started just four league games since a €60m switch from Eintracht Frankfurt. 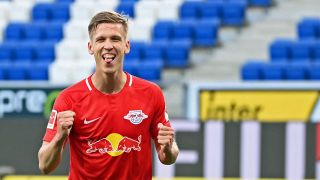