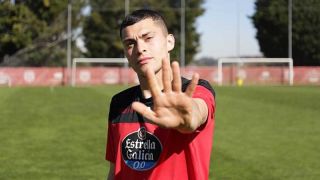 Lugo winger Yanis Rahmani has called for football authorities in Spain to adapt a tougher stance to racism after he suffered abuse in a league clash at Fuenlabrada.

Born to Algerian parents, the Frenchman – on loan at the Galician side from Almeria – claims he was the subject of clear and direct racism from sections of the Fuenlabrada support during a recent league clash between the two in Madrid.

“People who shout racist abuse should get more into the skin of those who they are insulting and think that behind a person who suffers discrimination there is a story they don’t know anything about,” Rahmani  told an interview with Marca.

“The words I heard were very clear and very direct, it was not something that anybody should ever have to hear or suffer from.

“When it is in football, abuse has become normalised and lots of ugly things are directed at players, so it is not taken seriously.

“We know that as players we have a great influence on society than the defenceless immigrants on the street but it is up to authorities to take full responsibility with their decisions and punish this behaviour.”

Rahmani also explained that racism cases are often downplayed because the people who hear about the behaviour and make judgements upon it never suffer from racist abuse themselves.

The player, who began his career in the youth system at Athletic Club Bilbao, also stressed the need for more serious action on these types of cases and believes that education is key: “Without education, people are ignorant to the reality.

“They do not understand the context of what these comments have and how damaging they are to people who here them.”

He added that if these incidents were not punished more severely, they would continue to happen and racism would never be eliminated from football stadiums and society.

“Something must be done now, but nothing is being done, he added. “There are plenty of publicity campaigns about ‘stopping racism’ but when it comes to the moment of truth, it still continues.”