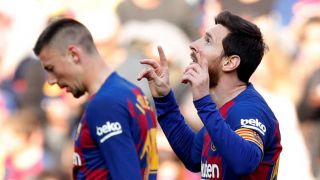 An incredible first half hat trick for Lionel Messi secured an emphatic 5-0 La Liga win for Barcelona at home to rivals Eibar.

Messi, who added a fourth in the second half moves on to 18 La Liga goals for the season, as Barcelona keep up the title pressure on rivals Real Madrid.

La Blaugrana were on top right from the word go against Jose Luis Mendilibar’s side, as Messi brilliant chipped finish put them ahead on 14 minutes.

The hosts continued to push on from there, as Arturo Vidal drew a smart save from Eibar keeper Marko Dmitrovic on 24 minutes.

But the game was to turn into the Messi show just after the half hour mark, as he tucked home Vidal’s pass on 37 minutes, before converting Antoine Griezmann’s blocked effort three minuted later.

With the tie essentially over after the break, Quique Setien opted to rotate and rest Gerard Pique and Sergio Busquets ahead of the Champions League clash with Napoli in midweek.

But Barca refused to drop their level after the restart, with Dmitrovic called into action to deny Ivan Rakitic and Griezmann.

New signing Martin Braithwaite replaced Griezmann for the closing stages, and the Danish international played a key role on his club debut.

Two late efforts from the former Leganes man were parried by Dmitrovic, with Messi and Arthur Melo on hand to complete the rout.