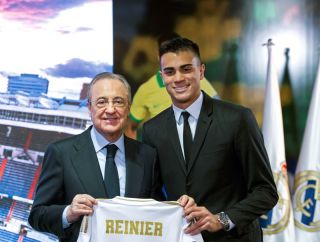 Real Madrid president Florentino Perez has spoken of his excitement at the signing of Brazilian teenager Reinier Jesus from Flamengo.

The 18-year-old is said to be the latest jewel to emerge from Brazilian football and is widely tipped to have a big future ahead of him at the top level.

Madrid beat off competition from Barcelona and Manchester City to land the teenager last month, as they paid South American champions Flamengo €30m to secure his signature.

Reinier only debuted for Flamengo – who won the Copa Libertadores in 2019 along with the Brazilian top-flight – last year, but he already has six goals in just eight starts in the league.

Reinier will play for the club’s Castilla side for the remainder of the season and there are hopes in the Spanish capital that his fellow young Brazilians Vinicius Junior and Rodrygo Goes will help his adaptation into the club and culture in Madrid.

“This is another special day because another player arrives and that excites us,” Perez told the press conference, as cited by Marca.

“An 18-year-old who has already been a champion of the Copa Libertadores with one of the great clubs in the world.

“Reinier, you are already a Madrid player, a team that you chose to play in video games, the one that was part of your dreams, many compatriots of yours who have been successful in Madrid.

“This is a club who have won 13 European Cups and you have arrived with humility and sacrifice, both yours and that of your parents.

“You are one of the emerging stars of the world football. Congratulations because today many of your football hopes are coming true. The great challenges of your life await you.”