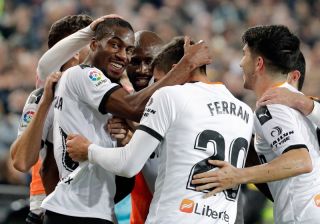 Valencia and Atletico Madrid cancel each other out in pulsating draw

Valencia and Atletico de Madrid played out a pulsating 2-2 draw at the Mestalla ahead of their Champions League action next week.

Diego Simeone’s side led twice through Marcos Llorente and Thomas Partey but each time Los Che roared back with Gabriel Paulista and Geoffrey Kondogbia – two unlikely goalscorers – finding the net.

It was an intense match played at a high tempo throughout and with both teams likely to find that a draw was a satisfactory outcome.

Atleti had netted just twice in their previous six games in all competitions but showed more of an attacking cutting edge, but conversely were undone twice by set pieces.

The first goal for the hosts came courtesy of Brazilian defender Gabriel – his first goal since December 2015, when he scored for Arsenal against Bournemouth.

The central defender ended the game with an injury but his side temporarily move up to sixth, two points and two places behind Los Rojiblancos, who stay fourth.

Atalanta and Liverpool, respectively, are the Champions League opposition for the two next week.